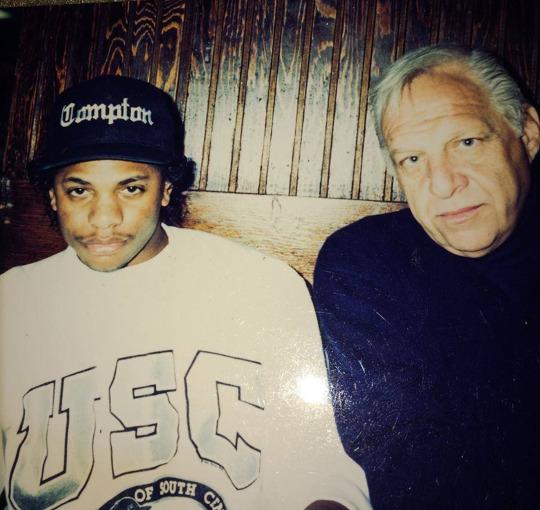 One of the key characters in the N.W.A. biopic Straight Outta Compton (in theaters Friday) is Jerry Heller, the manager who steered the controversial rap group to fame. Played by Paul Giamatti, he begins as a mentor to young musicians Eazy-E, Dr. Dre, Ice Cube, DJ Yella, and MC Ren, but becomes one of the causes of the group’s ultimate break-up when they discover how much money he’s taken from them. While Straight Outta Compton producers Ice Cube, Dr. Dre, and Tomica Woods-Wright (the widow of Eazy-E) strove for accuracy in the film, there’s one major player who wasn’t consulted: Jerry Heller. In a lengthy profile on Grantland, the 74-year-old cofounder of Ruthless Records shares his feelings about N.W.A. and his version of the events depicted in the film.

Heller started out his career working with rock bands in the sixties, but told Grantland that the greatest part of career was managing N.W.A. “Look, I brought Elton John here. I represented Marvin Gaye, Pink Floyd, Journey, Styx, REO Speedwagon, Van Morrison,” said Heller. “Of all the things that I’ve done, certainly the most important period of my life was March 3, 1987, to March 26, 1995. That was my period with Eazy-E. That was the period I’m most proud of.”

Heller first met Eazy in 1987, when the young hopeful paid $750 to have the music manager hear his debut single, “Boyz-n-the-Hood.” Right away, he says he knew that the music was something special — and potentially revolutionary.

“I think that N.W.A picked up where Bobby Kennedy and Martin Luther King would have gone if they hadn’t been assassinated,” Heller told Grantland. “I think that they did more for race relations in this country than any other entity in history.”

As the group took off, Heller formed a relationship with Eazy-E — who died due to complications from AIDS in 1995 — that he describes in familial terms. “He really was like flesh and blood. Like a son,” he told Grantland. “He was a good kid. He was the best.”

But Heller’s relationship with N.W.A. was not all positive. In the film, Eazy (played by Jason Mitchell) and Heller have a falling-out after Woods-Wright discovers some damning financial records. Heller refused go into detail with Grantland about the end of his relationship with Eazy — but he did deny stealing from the musicians, telling Grantland he never took anything that didn’t belong to him. Writer Amos Barshad speculates that this might “technically be true,” since Heller, like many music svengalis, gave himself a huge percentage of his protégées’ earnings.

The members of N.W.A., however, felt betrayed by Heller. Speaking to Grantland, Ice Cube said, “We come to find out that when it got real thin at Ruthless he started stealing [from Eazy], too. I mean, we can’t say stealing. But misleading. ‘Cause Eric’s not really here to tell the whole story.”

Ice Cube and Dre were to part way with Heller in 1991, breaking up the band in the process. They have repeatedly blamed their ex-manager for the band’s dissolution, attacking him in songs like “No Vaseline,” in which Cube called him the “Jew” that “break[s] up my crew.” (“Yeah, it hurt me,” Heller admitted.)

Cube, whose son O’Shea Jackson, Jr. plays him in the film, says that he no longer carries hatred for Heller. “You know, it’s a long time ago,” the rapper said. “Respect the fact that Eazy was no fool. And this guy was like a father figure to Eazy. In a lot of ways, he did what he said he was gonna do. Which is, make him legit. We were selling records out the trunk of our car before Jerry came into the picture.”

As for Heller, he has distanced himself from Straight Outta Compton,saying, “The movie has nothing to do with what we did.” But the screenwriters still took pains to paint a nuanced picture of the man who changed five young rappers’ lives. “I didn’t want him to be a total a—hole,” screenwriter Jonathan Herman told Grantland. “I mean, obviously he did some unscrupulous things. But he really believed in these guys. This old white dude really did champion their music.”