TODAY’S YOUR LUCKY DAY B*TCHES — because with enough money … and bad taste … you could own this mind-bogglingly hideous Hulk-themed car, repossessed by the Feds during a 500-pound weed bust this year.

The ’89 Chevy Caprice was repo’d in March during an investigation against a suspected Ohio drug dealer named Thomas King — and it’s currently being auctioned off online by the U.S. Marshals Service.

According to the listing, the car features a Corvette engine, 30″ custom-painted wheels, custom A/V system with 12 amps and 4 15″ subwoofers, 4 TVs, and an iPad for controls. 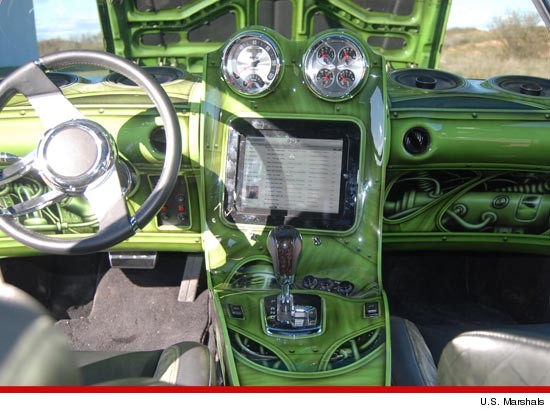 It also features hydraulic hood and trunk operation and electric exhaust cut-outs (whatever they are). The auction ends Monday.

FYI — the Feds didn’t just repo the Hulk machine during the bust … they also snagged 500 POUNDS of weed, a loaded assault rifle, and a bunch of other less-awful cars. The combined value of the vehicles was estimated at $500,000.

King has been charged with second-degree felony possession of drugs. The case is still pending.