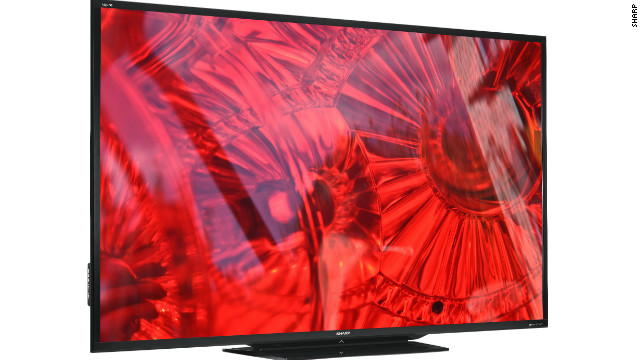 How’s this for a superlative? The biggest TV in the world.

It may not be that simple. We know of at least a couple of plasma screens that are larger.

But with a 90-inch screen, Sharp may have just rolled out the biggest LED high-def television on the market.

The new Aquos LED TV, unveiled Tuesday, stands 4 feet tall and is 6 feet, 8 inches across. (As Consumer Reports notes, that means your television screen would be as wide as an average NBA forward is tall).

Despite all that, Sharp brags, the set is less than 5 inches thick and weighs 141 pounds (considerably less than an NBA forward).

Seriously. They tacked on the extra 99 cents.

Consumer Reports obviously didn’t render a verdict after just a quick look, but noted that Sharp “has definitely taken the lead in larger TV screen sizes.” It cited the 60-, 70- and 80-inch sets from the past, saying they had typically done well in TV ratings, although some of the monster screens had relatively narrow viewing angles.

“Of course,” Consumer Reports added, “not everyone has the room — or room in the budget — for a 90-inch set.”

So, when rolling out the world’s biggest TV (in its class, anyway), why bother with subtlety and understatement, right?

Sharp Electronics of America President John Herrington said it “offers size, picture quality and smart functionality unlike anything consumers have experienced.” But that was barely a warm-up for the news release accompanying the announcement.

“Imagine yourself standing at the precipice of the Grand Canyon,” it reads. “It’s 3,000 feet straight down. The wind howls in your ears. Your heart races as you leap forward and plummet toward the bottom. Just before you plunge into the river below … you spill the popcorn all over the living room couch.

What do you think? Would you ever consider such a massive TV? Or would you just save the $11,000 for an actual trip to the Grand Canyon?